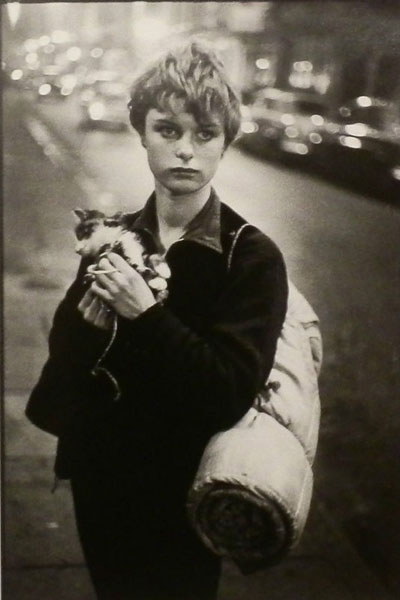 Especially the ones that are in our mind.

If you had seen me many years ago, homeless and wandering the streets of the city with Daisey Mae, you would never have known I was destined for Royalty.

With effeminate looks, I was even mistaken for a girl. My given name was Alik Ange, long before I landed my stage name. In between the two, if I had any friends, I would have asked them to call me Angelika.

What rugged man would have a homeless cat as a travelling companion?

Who would be so silly to try and feed another mouth, when even my own was clearly being largely ignored?
———-
I am not sure how Roy Williams came into possession of this photograph that was taken of me and Daisey Mae.

A professional photographer who was a passerby forgot his camera in the car, and had just bought an inexpensive throw-away. He snapped the picture and said, “You keep it, it’s obvious you two were meant for each other.”

That was moments before it happened.
————–
The dumpster had itâs lid propped open with a flimsy stick, so that garbage could be easily tossed into it as the day wore on. It was rather a stupid thing, as the underside of the lid had a razor sharp edge, not dissimilar to the inner rows of a sharkâs mouth.
————–
I didnât know it at the time, but I stumbled onto Daisey at eight.

She was being attacked by a vicious rottweiller who escaped the grasp of itâs owner and was roaming the streets looking for easy prey.

Daiseyâs fragile body was about to be mangled, when I beat the dog off with my knapsack.

The die was cast that day, and Daisey and I became best of friends. Her loving purr told me she would do anything for me, even though she distrusted men the first few months after she was born.
————–
My journey began in earnest when my over-bearing, over protective parents kept me locked up in boarding school. I was where I was supposed to be, on the fast track to take over the family dynasty.

How the maze that was to be the rest of my life was supposed to turn out was already planned from the moment of my conception.

Why bother being born?
————-
Daisey Mae ran into number nine a little after this photo was taken. She had beautiful Daisy-like colors, like the beginning of Spring. She had a gentle demeanor that belied the fierceness of her spirit.
————–
Flying with a broken wing is a real challenge; at least that has been my experience.

Living hand to mouth is not easy. It takes courage, commitment, and belief. Belief in our self, and belief in something greater than ourselves.

Did I say the journey begins in our mind before it ever becomes a reality?
————
I crossed the Rubicon a few years ago, when I had the operation.

It changed my life, and I have never looked back.
———————
If I have one song to sing, itâs bring it on. We are all born with unique talents and skills, and the world is waiting for us to play our part.

Daisy Mae played hers that fateful night when I was attacked by a drunkard who saw that I was vulnerable, an easy mark. While we lay huddled in an alley eating scraps from the greasy diner, he was all over me in an instant. Daisey Mae lept to my defense, clawing with purpose at the back of the perpâs neck as he viciously attacked me. When the man turned over to deal with Daisey Mae, I was able to slip away.

The glint of steel was the last I saw as I heard the shot ring out.

I shall never forget that wailing sound Daisey Mae uttered as her front right forearm was shattered by a crushing blow from the assailant. Summoning up the courage as if she was Bram Stoker’s Squaw, Daisey threw her body against the tentative stick, and the lid fell. As luck would have it, the top slammed shut, shearing off half his face, just above the attackerâs right eye.

The next morning I found her limp body behind the dumpster.

She had given her all for me.
—————-
Sometimes life is kind, sometimes unjust. We just never know how things will work out until the end.

Do you believe in destiny?

If you ever make the time to read “A prayer for Owen Meany”, perhaps you will.
—————-
Some of the pictures I think of when I fondly remember Daisey Mae. Guess which one is my favorite. 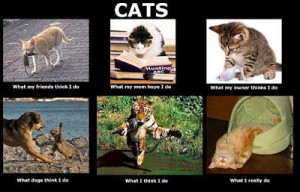 ————-
You may have seen some of the shelters for homeless cats that have sprung up recently.

The first one I opened in memory of Daisey Mae was an instant hit, and the rest is history.
—————-
Speaking of history, Daisey and I were inseparable ater that, until she passed away many years later of natural causes.

The vetinarian who fixed her up said âIâve never seen anything like the will to live that this cat has, she sure has someone she she wants to spend that ninth life with.â
———-
I can still hear her purring âAngelikaâ as she lies in a sunlit alley and I gently ask her: âDaisey, may I caress your belly?â

It was easy to write a song about her… watch me sing it.

I’m a bit more confident these days, wouldnât you say?