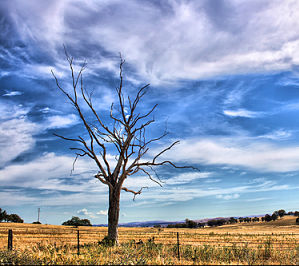 When the weekend arrives, we get a chance to work on other areas of our lives.

The pursuit of money is a necessity, of course, but there is much more to life than that mundane exercise.

Following up on my action plan to get out from in front of the computer more often, I was the typical weekend warrior, only in the relatively sedate world of mulching the garden, pulling weeds, and trimming trees.

Lugging around 30 bags of mulch, digging, hoeing, and raking left myÂ muscles weary after the lactic acid found what seemed like virgin territory in my arms.

I have usedÂ a chain saw before. I have an old timer; a big Stihl that just wont quit. It is powerful, but heavy, so I borrowed a friend’s light weight electric saw.

I reminded myself that my father-in law always said to “respect power tools, or they will bite you every time.”

Years ago when I was a teacher, we found we were having some serious injuries in gymnastics. Class was about 50 minutes long, and upon observation it became clear that most of these problems happened in the last halfÂ  hour.

I instituted a “time out” after 30 minutes of activity. We gathered the kids, sat down, and did a review of a few key skills for about 10 minutes. We also reminded them to “spot” one another, and then embarked on some less aggressive new activities for the last 15 minutes of class.

We reduced injuries by a whopping 80%.

After an hour and a half of climbing up the ladder and sawing branches, I was thinking of those former observations.

My wife was holding the ladder so it wouldn’t slip; I was cutting the large branches carefully, and had her positioned so she was out of the way when the branches fell, even if, as they often did, they “kicked back” towards us.

I was totally focused on the gnashing teeth of that chain saw.

That’s when disaster struck, on the last tree, with only one branch to go.

A few weeks ago, I suggested that the markets might be ripe for a pullback. I advised caution, and suggested you may want to take a time out.

Purely a guess, but an educated one.

More than a hobby at this point, I pursue financial markets with a passion.

Ten feet off the ground, as I was cutting the branch, I sensed it falling away much faster than the others had.

I looked up and it was then that I finally saw the widow maker.

A deadÂ limb had fallen from above, and was resting on the branch I was cutting. It came crashing down, and I was powerless to protect myself and my wife. I feebly raised my left arm to protect myself, and yelled to my wife to “get back”.

How many times do our investments behave that way?

It was only by the grace of God that we were unharmed. The branch bounced off the tree, missing us both, and laying Â harmless on the ground.

Sometimes we get lucky.

I need some time to process today’s activities. Suffice it to say that reading “Tuesdays with Morrie” years ago has still left me totally unprepared for the aging of America.

More about that next time.